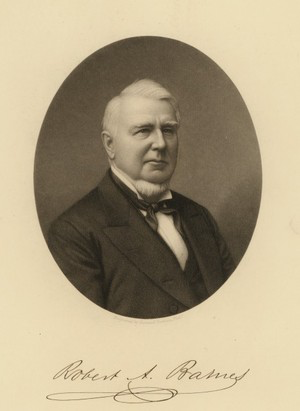 Robert Augustus Barnes—grocer, commission merchant, bank president, stockholder, property owner, and philanthropist—was born November 29, 1808, in Washington, D.C. His father, Jesse, died when he was thirteen years old, at which time he moved to Louisville, Kentucky, to be raised by his uncle Richard Barnes. He supplemented his rudimentary education with extensive reading, and became knowledgeable in several subjects. After working as a clerk for two years, he moved to St. Louis in 1830, and took a position in a mercantile house. At twenty-three years old, he opened his own grocery and commission business. While a merchant, he held partnerships with John W. Reel, Antoine S. Robinson, John C. Swon, George Sproule, and Anaw Buchanan.

In the early 1840s, Robert Barnes became president of the Bank of the State of Missouri, a position which he held for twenty-six years. He also held executive positions in other local companies, including the St. Louis Railroad Company. In addition, he was a large stockholder in various local companies, including Belcher’s Sugar Refining Company, Third National Bank, and the St. Louis Railroad Company.

Although he was a successful businessman and capitalist, he kept his financial status private during his life. He contributed to several charitable organizations, and left a portion of his wealth to found and endow a hospital in his name. He also owned property in St. Louis, Missouri, Illinois, Iowa, and Wisconsin. He left his fortune in cash, convertible securities, stocks, bonds, and property.

When Robert Barnes died in 1882, he left a million-dollar bequest in his will for the founding of a new hospital to serve the people of St. Louis. Without an heir, all he wanted in return were flowers to share with his wife.

His generosity gave rise to Barnes Hospital. At the dedication of the new facility in 1914, the board of trustees announced their hopes that Barnes Hospital might one day be known as “the Johns Hopkins of the West.”

In the intervening years, that hope was surpassed in ways that even the visionary Robert Barnes might have been unable to fathom. By merging with the Jewish Hospital of St. Louis and partnering with the Washington University School of Medicine, Barnes-Jewish Hospital is now the top hospital in St. Louis and consistently ranks among the best medical centers in the nation.

Back in 1914, Bishop E.R. Hendrix spoke warmly of Barnes at his address for the dedication of Barnes Hospital, closing with these words:
“I am mindful of the single personal request that Mr. Barnes made in his will, and that is that the trustees have a kindly eye on the sacred spot where sleeps the dust of his devoted wife and himself in lovely Bellefontaine. I am sure that no Memorial Day will be permitted to pass without suitable flowers being placed on their graves…” 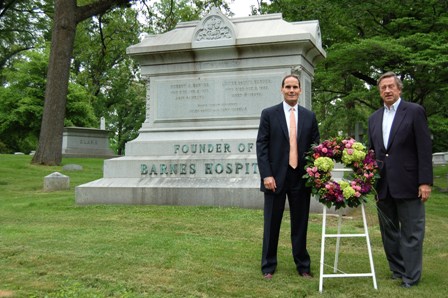 Rich Liekweg, Barnes-Jewish Hospital president and BJC group president, and Craig Schnuck, chair of the Barnes-Jewish board of directors, visited Bellefontaine Cemetery to place a wreath at the grave of Robert Barnes, his wife, and their two children, who died in infancy.  It is a simple, yet fitting tribute to a man who left no descendants by blood but continues to touch the lives of St. Louisans and the thousands of others who come from around the world to seek care at the hospital that bears his name.
(Barnes Hospital News)