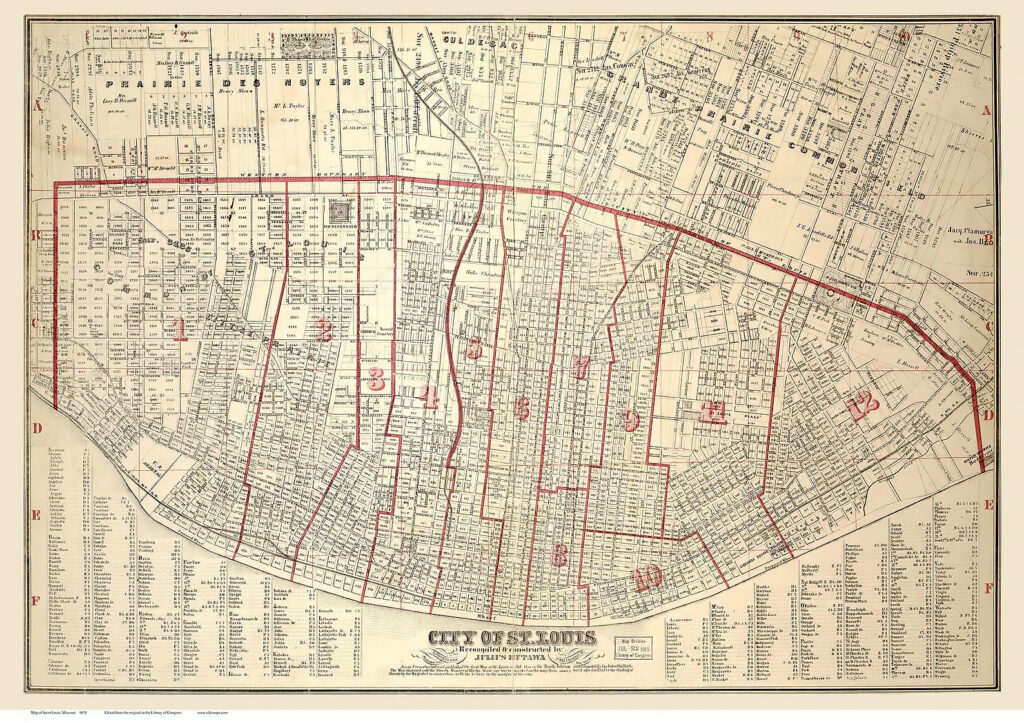 The City of Saint Louis in 1870. Grand Avenue was the western boundary of the city.

To understand the lives of the residents we’re studying in the Lucas and Garrison profiles, we need to understand what Saint Louis was like in 1875.

“Between the Saint Louis of 1875, and the trading post selected by Pierre Laclede Liguest, in the fall of 1763, are interposed, in thick array, some of the most momentous events of modern times. When compared by the historian, the period of time is short, yet it measures a season of human activity, and a series of results, such as have no recorded parallels. a continent has been recovered from savagery, a nation has been created more extended and more homogeneous than ever before existed commerce and the arts have  been organized upon principles owing their development to our own times, the most fertile valley in the world has become the centre of a new civilization, and a metropolis, owing much of her growth and much of her strength to influences that are new, has been fixed upon the western bank of the Mississippi. Where, but little more than a hundred years ago, was seen only solitary sloping woodland, backed by prairie and grove, these pages now exhibit the homes of more than half a million people, the site of the metropolis, through which passes a trade more beneficent in its results, and grander in its aggregates, than the dazzling and shifting prize which India for centuries tempted the commercial avidity of Western Europe.”

So begins the Historical Sketch of the City of Saint Louis as recorded in the preface of Compton and Dry’s Pictorial St. Louis, the Great Metropolis of the Mississippi Valley. 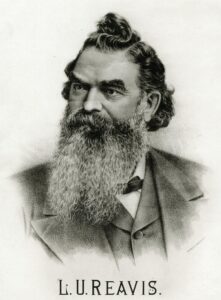 Indeed, the story of St. Louis was an amazing tale in 1875 when these words were written. Although now disputed, Saint Louis was the fourth largest city in the United States, trailing only New York, Brooklyn (its own city at that time), and Philadelphia. The city was thriving. There was serious national consideration, led by the campaigning of Logan Uriah Reavis, to move the capital of the United States to Saint Louis. The city’s growth, in almost every category imaginable, was off the charts. Some of the city’s statistics are listed in another section of this website. The population was estimated to be half a million people counting the entire region.

However remember, the historical sketch was written in 1875. To understand the real scope of Saint Louis’ success, we must consider the accoutrements of urban success that were not as of yet available to the population. In 1875 in St. Louis most streets were not paved, transportation was by walking, horseback, horse drawn carriages or the beginning of horse drawn omnibuses on down town streets. There were no telephones. Communication nationally was through telegraph which was newly invented after the use of the pony express. 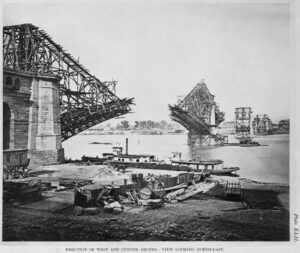 Eads Bridge, the first bridge across the Mississippi in Saint Louis, would not be finished until 1876. Ferry boats were the only way to cross the river. Steam boats were the method by which commerce was accomplished to and from Saint Louis. Railroads were in their infancy as rail lines were built connecting the major cities of the country.

There was no electricity until the early Twentieth Century. Some more affluent homes were lighted by natural gas. Homes were heated with wood or coal burning stoves. Cooking was accomplished through wood fired ovens. Most homes did not have indoor plumbing. Water, from the Mississippi, was drinkable but barely. The sewer systems were rudimentary. The advantage of living life without all of the inventions that make life much easier and more productive is that you don’t know what you’re missing.

As you consider the profiles of the residents in this project, and the institutions that are described, keep the state of Saint Louis in mind and it makes the accomplishments of the era that much more impressive. 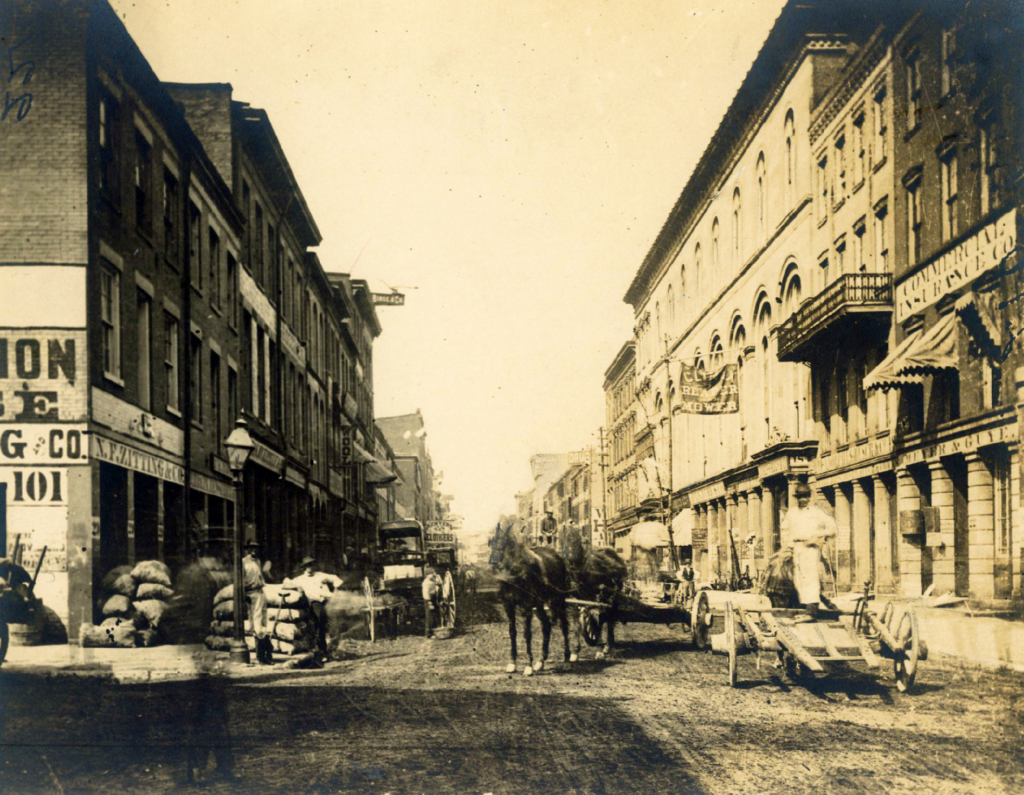 Views along Fourth Street in early 1870 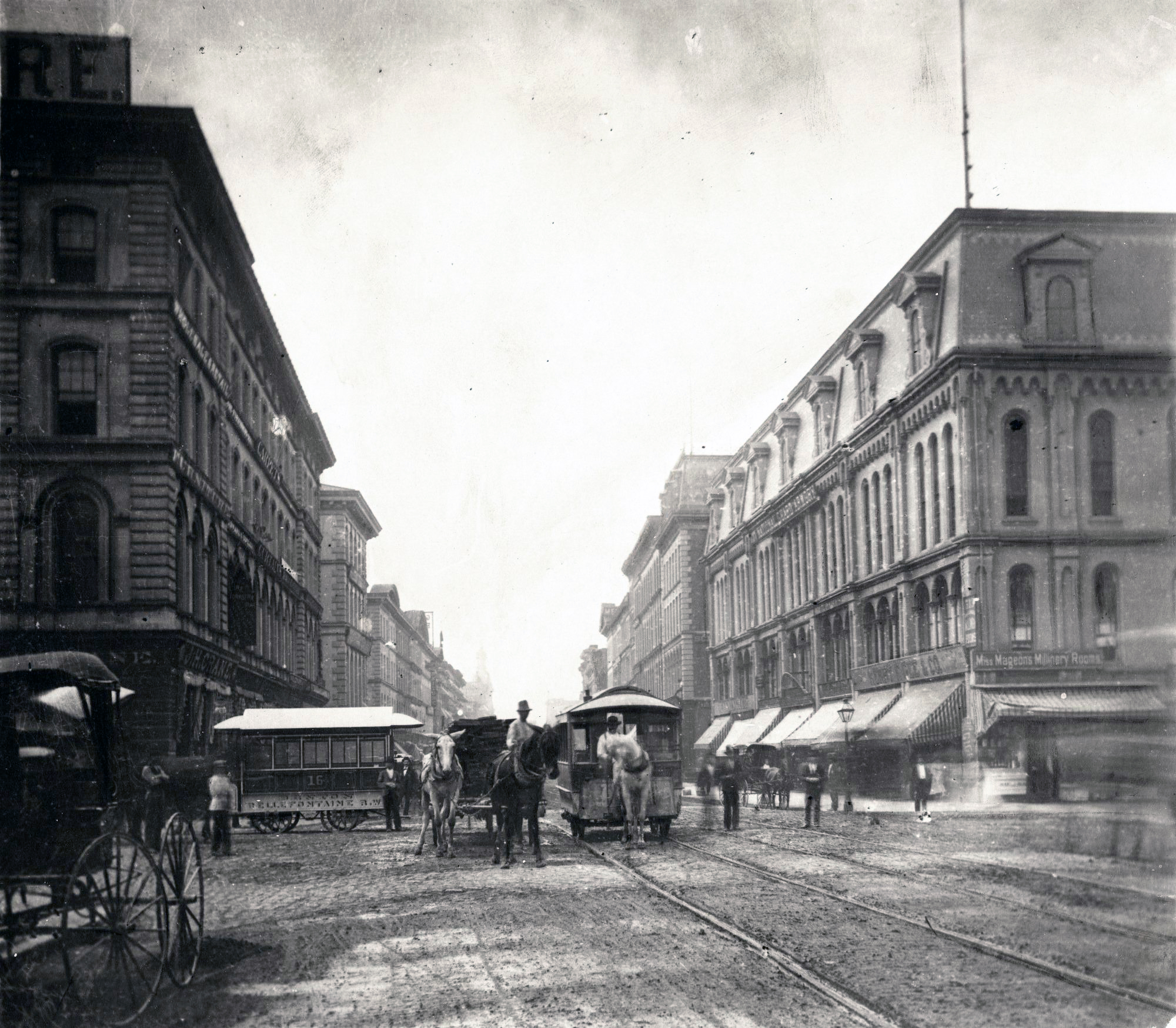 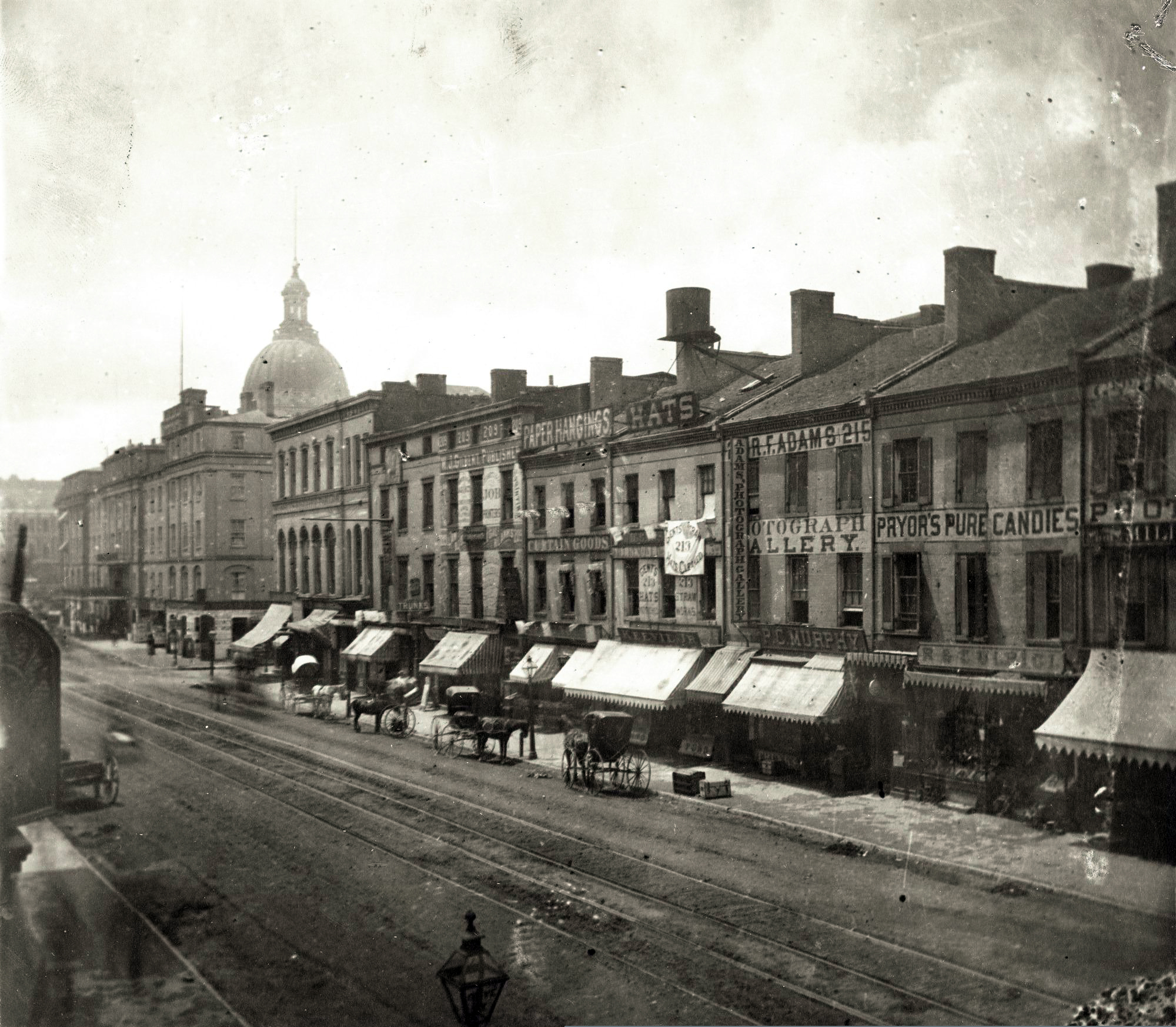 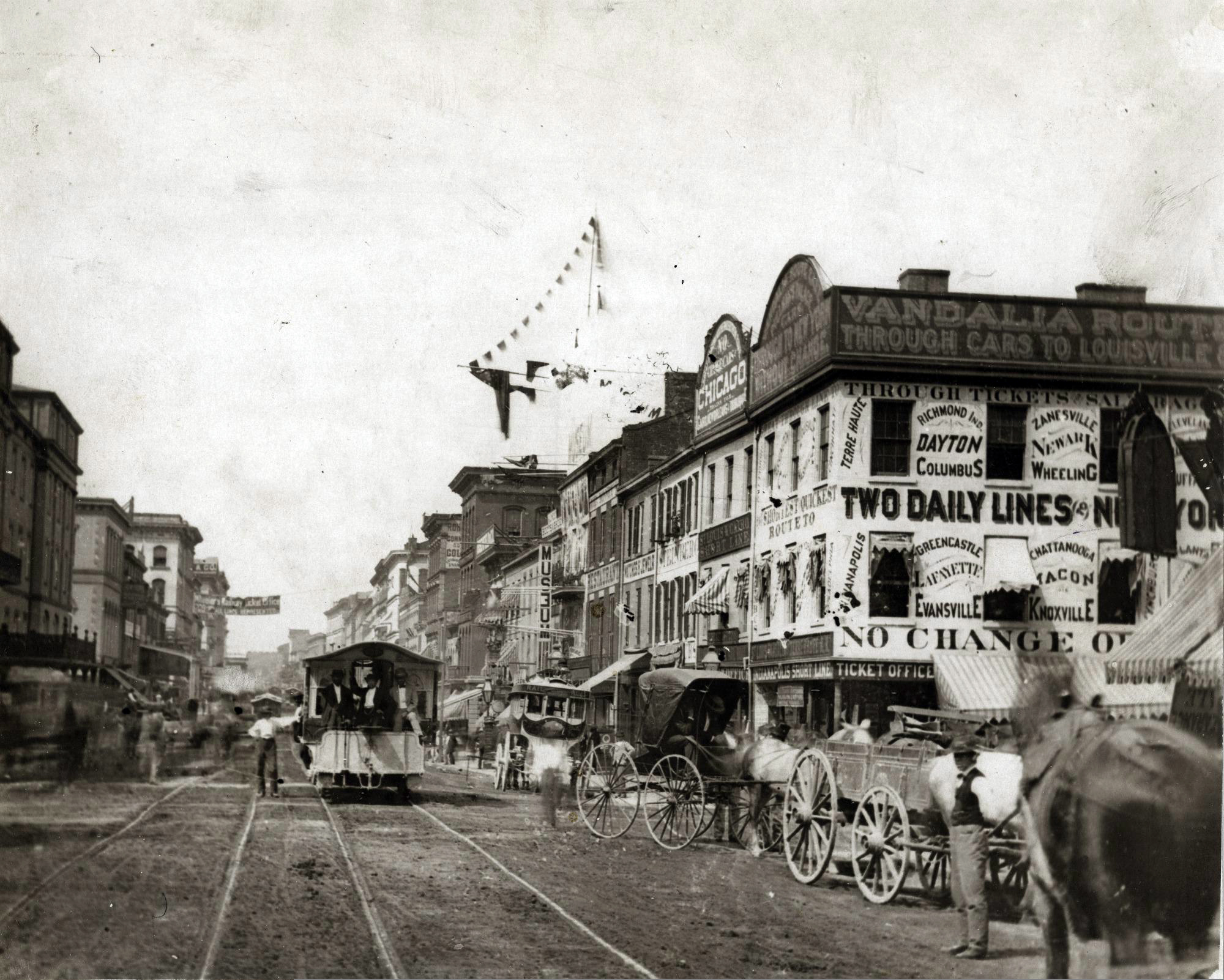 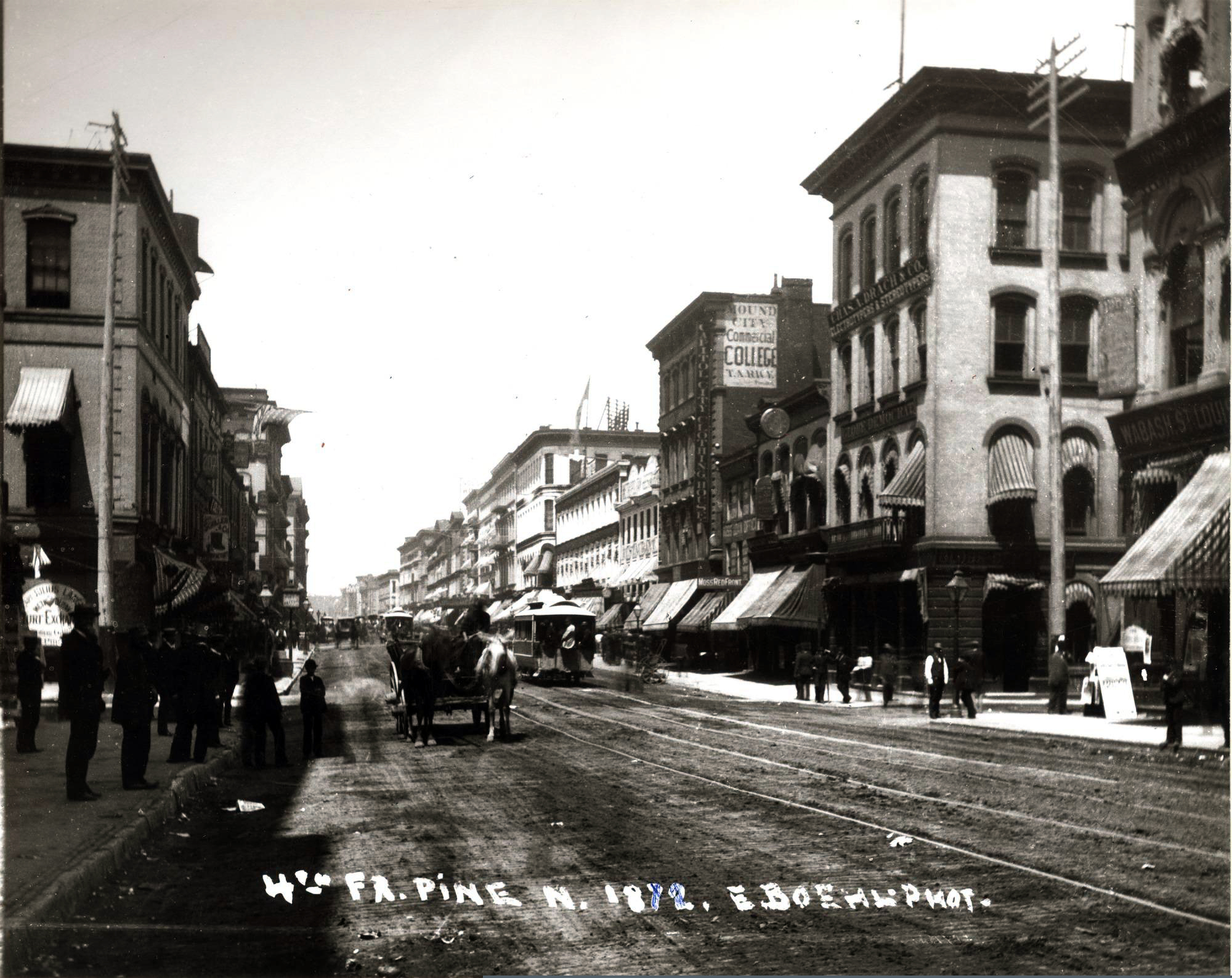