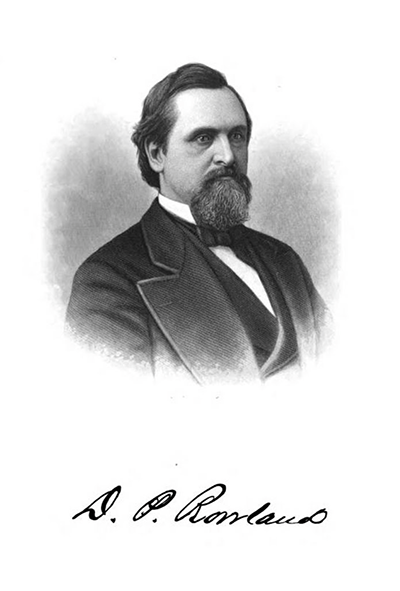 David Pitman Rowland, president of the St. Louis Merchants’ Exchange, and member of the mercantile house of Shryock & Rowland, was born in Richmond, Madison County, Kentucky, in the year 1832. His father, David Irvine Rowland, was a substantial, well-to-do merchant in Richmond for a period of forty years, having moved from Campbell County, Virginia to Richmond in the year 1806. His mother’s maiden name was Mahala H. Tyree, who was a Virginian by birth, and went to Richmond in 1818. The grandmother of David Pitman Rowland, on his father’s side, was the daughter of David Irvine, one of the earliest settlers of Kentucky.

The early educational advantages of young Rowland were not such as a lad of his spirit and independence could, perhaps, have wished; for, while he did, at one period, entertain the desire of fitting himself for a professional career, he yet brought his studies to a close, at the school of his native town, at the early age of fourteen years. At this school he acquired the rudiments of a good English education, with, perhaps, a slight knowledge of the elementary branches of the classics. These, however, were but imperfectly learned; and, abandoning all thoughts of fitting himself for a professional life, he turned his attention on mercantile pursuits. Fixed in this purpose, and firmly resolved to overcome all obstacles, he entered the store of Field & Holloway, in his native town, who, at that period, conducted the largest establishment, as dealers in general merchandise, which was to be found in all that section of the country. The boy clerk had not remained here for long before his aptitude for commercial life became manifest to his employers. His advancement was rapid; his deportment gentlemanly’ his manners affable’ and he was promoted on account of his industry and integrity. It was comparatively but a short time before he had the run of a business as large and lucrative as that of any in that portion of the State. Into all his business avocations young Rowland carried a steady purpose. Blessed with perfect health and a strong, robust constitution, his energy and uprightness were marked characteristics which his employers were not slow to appreciate. From time to time, his compensation was increased, and being free from those habits of idleness and dissipation which many young men are addicted to, he was enabled to save, out of his earnings each year, a goodly sum with which to commence on his own account at a later period. 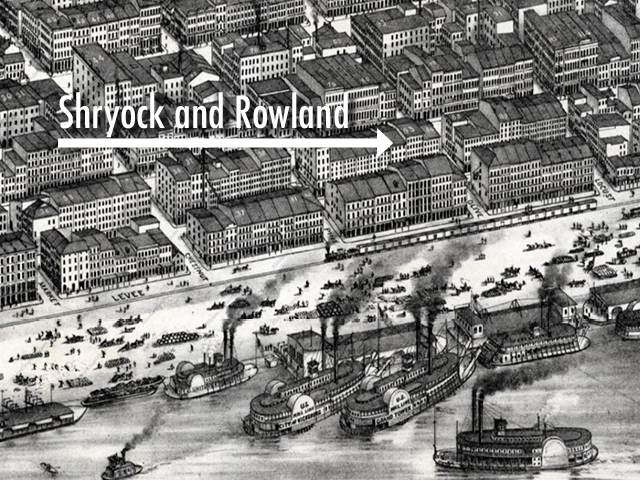 Young Rowland remained with Field and Holloway until November 9, 1853, when at the age of twenty-two, he paid an accidental visit to St. Louis, arriving here November 13, 1853. Previous to coming to St. Louis, Mr. Rowland had visited, at different times, nearly all the principal cities of the country – North as well as South – but not one of all commercial centers that he had seen in his various pleasure and business trips, made so strong an impression on his mind as a life commercial metropolis, as did St. Louis. After remaining here a few weeks, and becoming thoroughly convinced of the value and importance of the commercial relations of the city, Mr. Rowland accepted a position in the dry goods house of A.J. McCreery & Co., where he remained until 1860. At that time, with a moderate capital of a few thousand dollars, every dollar of which he had earned, he commenced on his own account, occupying unpretentious quarters on Locust, between Main and Second streets. His business at that time was confined almost exclusively to the leaf tobacco trade, which became large and lucrative.

In 1862, Mr. Rowland formed a partnership with Mr. W.P. Shryock, and, in addition to the leaf tobacco business, engaged in the business of pork-packing, which proved a very profitable venture – Shryock and Rowland. 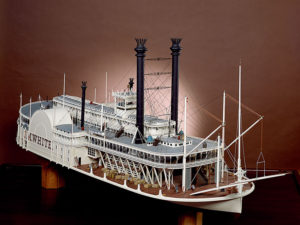 January 1, 1864, we date the beginning of the firm – since become so distinguished in the commercial history of St. Louis – of Shryock & Rowland. The firm entered at once into a general commission business, dealing in and handling all kinds of domestic produce, with their business located at No. 210 North Commercial Street. Since the formation of thi firm, its history is so closely identified with the commercial progress of St. Louis up to the present time, that it is almost impossible to speak of one without referring to the other. This house may be accredited with being  the pioneers in the establishment of trade relations between this city and the South, and of making these relations reciprocal’ and no small share of this work is due to the great prudence, energy and foresight of Mr. David Rowland. Mr. Rowland had confidence in the South – confidence in the commercial integrity of her people, which has never wavered in times of their prosperity or adversity – and no sooner had the war been brought to a close than every effort was made by this firm to restore and establish commercial relations with them. This firm saw the great benefits that would inure to them, and to the commercial prosperity of St. Louis, by securing he trae of Arkansas, and in the year 1868 there was projected, and put into successful operation, the Arkansas and White River Packet Company, comprising six boats, of which company Mr. D.P Rowland was the vice-president. It was through this enterprise that nearly all the business of the White River country was brought to St. Louis, having thus been diverted from its old channels which had led the trade of that section formerly to Cincinnati, Louisville and New Orleans.

On the 8th of September 1864, Mr. Rowland met with a sever domestic affliction in the loss of his beloved wife, leaving him one child. In April 1866, Mr. Rowland was a second time married, his present wife a daughter of Mr. J.A.J. Aderton, president of the Valley National Bank of this city, and by which marriage he has a lovely daughter, Belle Rowland. 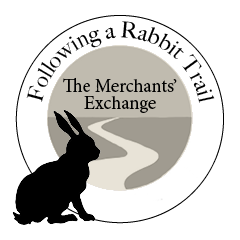 But it is not alone as a successful merchant that Mr. Rowland has occupied a conspicuous and useful position in the community in which he lives. While he has never sought political favor, he has filled many important and responsible offices which have been thrust upon him by popular election. His recent position as the thirteenth president of the St. Louis Merchant’s Exchange was the highest mark of honor in the gift of the merchants of St. Louis – and conferred upon him at the annual election, on the 6th of January 1875. Prior to the election of January 6, Mr. Rowland had filled the position of director of the Merchants’ Exchange four years in succession; is a director in the Phoenix Insurance Company; a director, also, in the Mound City Building Association; is vice president of Willard Improved Barrel Company; a director in the Valley National Bank; is Past-Master and Hight Priest of a Chapter in the Masonic fraternity; and last, by no means least, has been for nearly seven years past, a director in the St. Louis Provident Association, of which he has been one of the most active members, giving largely of his own means, and soliciting pecuniary aid in its support from his mercantile associates. 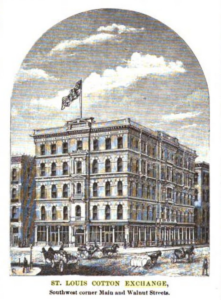 So varied and numerous have been Mr. Rowland’s services to the city of his adoption, that we almost omitted mention of the fact that he contributed largely to the establishment of the St. Louis Cotton Exchange. Through its workings, several millions of dollars have been added to the annual trade of the city.

Mr. Rowland’s religious views are those of the old School Presbyterian Church. He is a consistent member and faithful trustee of the Central Presbyterian Church in this city, of which the Rev. Dr. Brank is pastor. Mr. Rowland is now in the prime of a vigorous manhood; enterprising, but now speculative; cautious, without being over-timid; strictly honorable and punctilious in the fulfillment of every obligation, and disposed to exact and equal degree of promptness and fidelity on the part of others; yet capable of the largest measure of generosity and liberality.