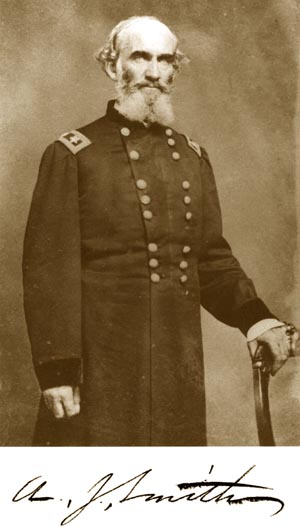 Living one block south of Lucas and Garrison in 1875, General Andrew J. Smith, the then U.S. Postmaster for Saint Louis, was one of he most decorated and illustrious players in the Civil War.

The distinguished Confederate soldier, inherited patriotic and war-like blood, and it was natural that he should ﬁnd himself adapted to the life of a soldier; and that he should win honor and distinction amid the rush and destruction of battle, is but the fulﬁllment of the decree of heredity.

As shattering and divisive as the Civil War was to U.S. History, especially in Missouri, a truly divided state, ten years after the war was over decorated soldiers from both sides again lived in peace as neighbors. Four blocks west of Lucas and Garrison (not on plate 71) was the home of General William Tecumseh Sherman.