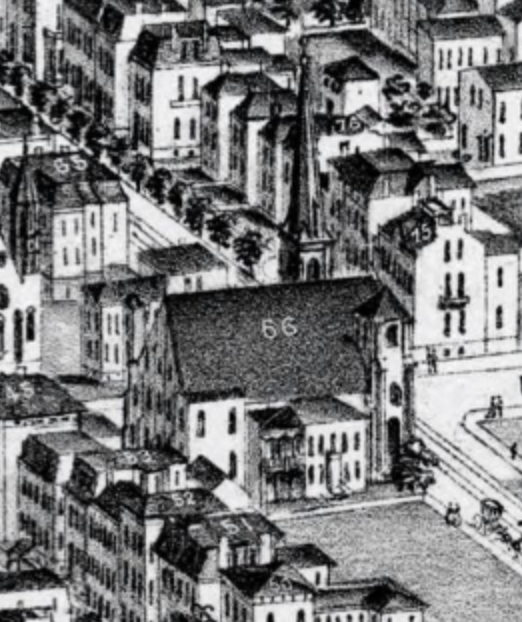 Southeast corner of Ewing and Washington

Pilgrim Congregational Church, corner of Washington and Ewing Avenues, Rev. C. L. Goodell, D.D., pastor, grew out of Pilgrim Sabbath-school, organized in 1853, by Rev. F. A. Armstrong, of Tennessee, temporarily residing in St. Louis. The school was established in the upper room of a two-story frame house at the northwest corner of Garrison Avenue and Morgan Street, where the residence of William Ballentyne now stands. After conducting the school one Sunday Mr. Armstrong was called away, and Stephen M. Edgell, a member of the First Congregational Church, continued it, chiefly at his own expense. For about twelve years he had personal care of the school-room, and in winter brought coal and kindling-wood from his own home, acting both as instructor and janitor. In 1854, the school having become too large for its quarters, Mr. Edgell leased a lot where now stands the residence of D. P. Rowland, 2910 Morgan Street, and erected on it a one-story brick building, in which besides the school religious services were held. On the 22d of September, 1865, an informal meeting was held at the house of William Colcord, 2800 Morgan Street, to consider the question of erecting a permanent building for the Sabbath-school and of organizing a new congregation.

In June, 1866, S. M. Edgell and James E. Kaime purchased a lot fronting eighty and eight- twelfths feet on Washington Avenue, and one hundred and thirty-four and three-twelfths feet on Ewing Avenue, for $7620, and presented it for the ” uses of an orthodox Congregational Church.” Pilgrim Chapel, a brick building, capable of seating four hundred people, and costing $14,460.80, was erected on this lot during the same year. On the 5th of December, 1866, the proposed church was organized as a colony from the First Congregational Church, thirty-six of whose members had been dismissed for the purpose. The chapel was dedicated on the 22d of December, 1866, the 22d being known as ” Forefathers’ day,” the anniversary of the day on which the Pilgrim Father landed at Plymouth Rock. A council of Congregational Churches was convened for the occasion, with Rev. J. M. Sturtevant, Jr., of Hannibal, as moderator, and Rev. J. M. Bowers, of Sedalia, Mo., as scribe.

In 1867 the foundations of the present stone building were built, at a cost of three thousand and forty dollars and forty-five cents, and Dec. 21, 1867, the corner-stone was laid with appropriate services at the northeast corner. In 1871 the erection of the present edifice was commenced, and on the 22d of December, 1872 (Forefathers’ day), the building was formally dedicated. The total cost, including that of organ and furniture, was fifty-six thousand three hundred and forty-eight dollars and nine cents. S. M. Edgell and D. F. Kaime were the building committee, and Henry L. Isaacs was the architect. The church is capable of seating thirteen hundred and twenty persons. The spire and tower were finished in 1876, and in the latter is the ” Oliphant chime” of ten bells, presented at Christmas, 1876, by Dr. R. W. Oliphant, in memory of his deceased wife and son. In connection with the chimes is a tower clock, striking the famous Cambridge University quarters, the first of its kind in America. The bells, clock, etc., cost ten thousand dollars. The pastors have been Revs. John Monteith, Jr., of Cleveland, Ohio, began Nov. 1, 1866, dismissed with seventy-one other members to form a colony, March 15, 1869; W. C. Martyn, of Union Presbyterian Theological Seminary, appointed June 24, 1869, resigned Sept, 1, 1871 ; H. C. Haydn, appointed Dec. 1, 1871, resigned April 1, 1872; C. L. Goodell, called Sept. 12, took charge Nov. 27, 1872, and formally installed June 5, 1873, the installation having been delayed by his illness.

In December, 1871, S. M. Edgell presented the two-story brick dwelling-house and twenty-five feet of land adjoining the church for a parsonage.

The brick chapel was rebuilt in the autumn of 1873, with a stone front, and raised to the height of the main edifice, and was fitted up with sewing-rooms, parlors, etc., at a cost of $13,229.80, and dedicated Jan. 21, 1874. The entire church property has cost $106,207.89. This was the first church erected west of Seventeenth Street, and out of it have grown the Third, Plymouth, Fifth, and Hyde Park Churches. It has also dismissed several members to unite with the Congregational Church at Webster Groves. About fifteen hundred persons are connected with the church, and there are seven hundred and fifty communicants. The Sunday-school has seventeen officers, fifty-four regular teachers, and a reserve corps of nineteen others. 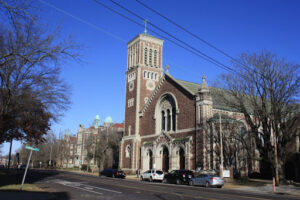 At the beginning of the 20th Century, having grown to 1,721 members, Pilgrim decided to move west, along with the growing population of the city. The current church structure with a seating capacity of 1,200 was begun in 1906 and completed in 1907.

The Rev. Truman B. Douglass, who served as Pilgrim’s minister from 1935 to 1943, initiated conversations that ultimately led to the creation of the United Church of Christ. He extended an invitation to the Rev. Dr. S.D. Press, head of Eden Seminary, an Evangelical and Reformed Church seminary in Webster Groves, Mo., to participate with a group of young ministers exploring “Christian Unity.” This small group went on to initiate the merger of the Congregational Christian and Evangelical and Reformed churches.

Through the years, the church building was improved and expanded with various new and improved facilities, the 150-seat Danforth chapel and the addition of a 78-rank four manual organ in the main church sanctuary.

In 1953, as St. Louis’ population continued to migrate westward and the neighborhood around the church changed, there was heated debate within the congregation about moving to the western suburbs. In a close vote, a majority of the members chose to remain in the current location and open the church’s doors to all who desired to worship, without regard to race or economic status.

The first African-American members joined in 1955. The church has continued to be a multi-racial faith community, with a roughly equal balance of black and white members for the past 40 years. In 2006, Pilgrim voted to become an Open and Affirming Church (ONA) within the UCC, making a public covenant of welcome into their full life and ministry to persons of all sexual orientations, gender identities, and gender expressions.

Pilgrim hosts a weekly soup kitchen, begun in 1982, which has served more than 100,000 hot meals in its 36 years, along with reading materials, blankets, and personalized holiday cards for our guests. When Dignity House, the UCC’s Neighborhood House located next door to Pilgrim, closed in 2010, Pilgrim stepped in to offer emergency food pantry services. Five years later, our Food Pantry (which also offers a limited supply of clothing and a small lending library) has become part of our regular mission, open two Wednesdays a month.

At the beginning of 2002, the congregation voted to revise the governance structure to meet current and future needs. Regular congregational meetings have been instituted in which the congregation participates in discussing and acting upon substantive issues. In 2015, Pilgrim Church Council completed the dissolution of the existing endowment arrangements to gain more flexible access to our funds, including the need to meet anticipated budget shortfalls, and reinvested the principal with United Church Funds.

Recognizing the need to adapt to the changing environment for churches and church buildings, in 2015 Pilgrim entered the New Beginnings process developed by Hope Partnership for Missional Transformation to discern our path forward. After congregational discussions and reflections and community research, Pilgrim voted in January 2017 to adopt a new mission statement: to live God’s call to love our neighbors as ourselves.

From the written history of Pilgrim Congregational Church presented on their website. www.pilgrimucc-stl.org