Among the men who have contributed much, in brains and energy, to the accomplishment of the commercial destiny of St. Louis, William J. Lewis has occupied a place in the foremost rank. Sternly practical in his views, unawed by great enterprises, whatever their magnitude, with a strong and healthy organization that gave him the poser to do an immense amount of labor, he has breasted the difficulties that beset many diverse fields of activity, and has carried off the rewards of fortune and distinction in each encounter.

He was born in Buckingham county, Virginia, October 27, 1825, and was one of a family of six children; all of them remarkable for fertility of intellect and determination of purpose. The death of his father, which occurred a short time before his birth, left the family dependent upon Benjamin W., and elder brother – now of our honored citizens. The entire family soon moved to Missouri, and settled in Howard county, engaging in the occupation of farming. Benjamin W. afterwards opened a business in tobacco, in Glasgow, Missouri, and William J. entered his employ. He remained in the service of his brother and Captain W. D. Swinney till 1849, when his ambition and self-reliance led him to come to St. Louis, and commence the same line of business on his own account, under the firm of J.W. & W.J. Lewis. Subsequently he became the senior partner of Lewis & Bro, and Lewis, Perry & Co., all of whom attained a high reputation for their products throughout the Mississippi Valley, and even in Europe. Mr. Lewis retired from the tobaco business in 1866, and engaged in the commission business with Captain James S. Nanson, under the firm name of Lewis, Nanson & Co. In 1870 he withdrew from the commission business, and became a partner in the banking house of Bartholow, Lewis & Co., commanding in the new line the same success that had attended his mercantile operations.The St. Louis Mutual Live Insurance Company, had for a time the benefit of his strenuous exertions in its behalf, and the influence of his name, and sound policy, dictated by his judgment, in its board of directors.

Memphis and St. Louis Packet Company, for some years following the organization of that Association, and was president of the Atlantic and Mississippi Steamship Company, the most stupendous steamboat corporation that has ever existed in the West. 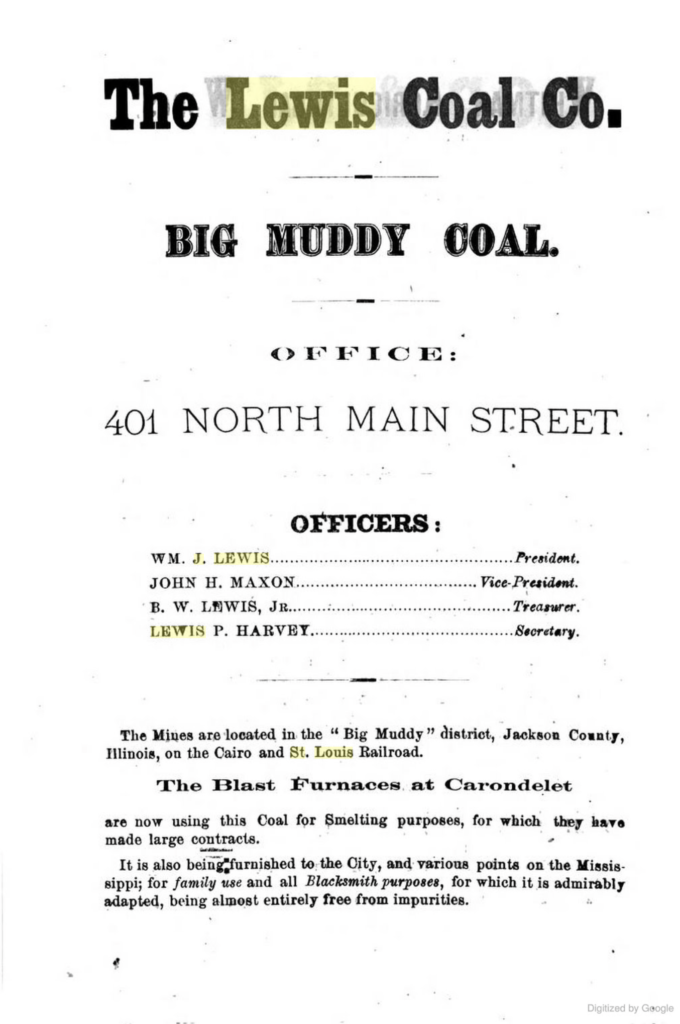 One of the great industries of Missouri, at last brought to aid in its development his fertile brain and energetic spirit, when he inaugurated and carried into successful operation the “Lewis Iron Company,” now one of the most important establishments in Carondelet. In 1870 he was elected President of the Union Merchants’ Exchange, by such a large majority as to invest that high endorsement with unusual honor. He is now president of the Lewis Coal Company, one of the controlling officers of the Meramec Iron Mining Company, and President of the Commercial Bank.

Quiet and self-possessed in manner, he possesses abounding energy and a genius for organization, that mark him for a leader in momentous undertakings. Toward religious, educational, and charitable objects his liberality is as prompt and unstinted as his business enterprises are bold and successful. St. Louis has already much to thank him for, and has reasonable expectation of being yet more deeply indebted to his generosity and sagacity.

Saint Louis, the Commercial Metropolis of the Mississippi Valley,

In the first years following the Civil War Mr. Lewis was active and zealous in the great effort of business men to reclaim St. Louis the trade that had been lost during the war, and to restore the deranged industries of Missouri; and every scheme that promised to contribute to these worthy ends could claim his attention, and usually secure his cooperation. His high spirit of unselfishness invited and secured the confidence of his associates in business, and he was recognized as a man whose ability to achieve success by upright and honorable means was a guaranteed that no enterprise committed to his management would ever be tarnished with even the suspicion of unfairness. One of his traits was a quick sympathy with deserving young men struggling against obstacles to make their way in the world, and there are not a few who, at this day, remember his helping hand with lively gratitude. He was a successful man, but his success never lifted him above his early friends, nor altered his unpretentious manners. He always remained approachable, simple and sincere, and he never lost his youthful intolerance of affectation and pretense.Mr. Lewis was married in 1852, to Miss Rebecca Turner, daughter of Talton Turner, of Howard County, Missouri. She was a wise counselor to her husband in his business enterprises and ventures and he was accustomed not only to seek her advice, but to give her credit, in a large measure, for the success which he achieved. She survives him, with their six children.

‘There could be no death in St. Louis that would have given a greater shock to the whole community than that of William J. Lewis,’ 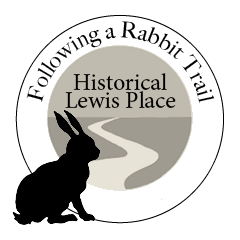 The morning after his death in 1879, The St. Louis Republican contained the following editorial: ‘There could be no death in St. Louis that would have given a greater shock to the whole community than that of William J. Lewis, which occurred very suddenly yesterday. He was a man esteemed in all circles. Of thorough business habits, enterprising and progressive, he seemed to influence all by whom he was surrounded. In social life he was genial and unselfish. He was devoted to everything that meant prosperity, fame or honor.’

Encyclopedia of the History of St. Louis: A Compendium of History, 1899