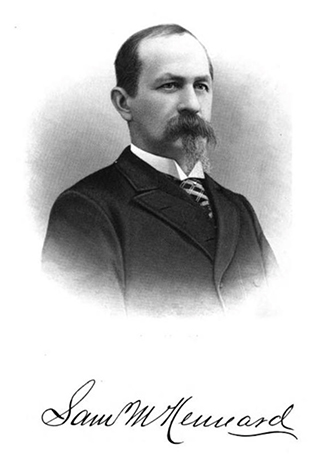 Samuel M. Kennard was at the head of the J. Kennard & Sons Carpet Company of St. Louis and otherwise prominently identified with important business corporations of the city. He was born in Lexington, Kentucky, in January, 1842, a son of John and Catherine (Fishburn) Kennard. He acquired his education in the public schools of his native city and when fifteen years of age came to St. Louis in 1857 with his father who established a carpet business. The son became the assistant of his father in this enterprise and as he advanced in years continually, became more and more efficient in the management and control of interests connected with the carpet trade. The business was developed to extensive proportions, becoming one of the foremost commercial interests of St. Louis.

At the outbreak of the Civil war, however, Samuel M. Kennard put aside business considerations and joined the Confederate army as a member of Landis’ Battery, attached to Cockrell’s Brigade. He saw active service in Mississippi, especially around Vicksburg, in 1863, and the command was surrendered to Grant when Vicksburg fell. He remained a prisoner of war until exchanged and afterward was promoted lieutenant in Landis’ and Guiboir’s Batteries, which were consolidated. He commanded a section of the battery at the battle of Franklin, Tennessee, October 30, 1864, under’ Alexander P. Stewart, and during the last six months of the war was with General Hood’s army in Georgia and Tennessee as aide-de-camp to General N. B. Forrest. 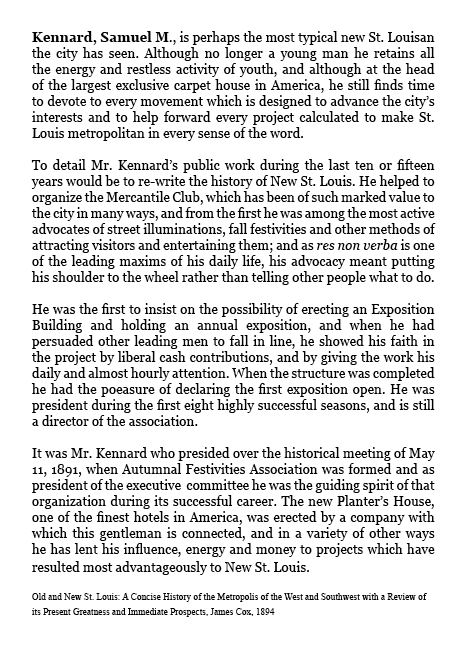 Upon his return to St Louis in 1865 Mr. Kennard was admitted to a partnership in the carpet business which had been established by his father, the firm style of John Kennard & Sons being then assumed. He more and more largely took upon himself responsibilities connected with the management of this mammoth concern and upon the death of his father in November, 1872, when the business was incorporated under the name of the’ J. Kennard & Sons Carpet Company, he became president and at the time of his death was serving as chairman of the board. He possessed in large measure that quality which for want of a better term has been called commercial sense. He was ever a close student of trade conditions and of the market as affecting the carpet business and his keen sagacity and ability to discriminate between the essential and the nonessential in business affairs brought to his house a most substanial measure of success. As the years passed he extended his connections into other fields, becoming a director of the National Bank of Commerce, also of the Commonwealth Trust Company and a trustee of the Barnes estate. He likewise assisted in building the new Planters hotel in 1894.

In St. Louis, in 1867, Mr. Kennard was married to Miss Annie R. Maude and they became the parents of six children: John B.; Sa’Lees; Annie M., the wife of J. H. Brookmire; Mary R., the wife of H. B. Wallace; Samuel M.; and Richard S. Late in life the Kennards occupied one of the finest homes in St. Louis at No. 4 Portland place and also had an attractive summer residence at Magnolia, Massachusetts. 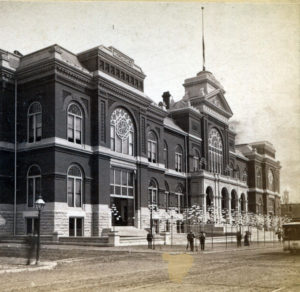 Mr. Kennard was keenly interested in the welfare of St. Louis and cooperated ‘ most earnestly and heartily in all projects for the upbuilding and benefit of the city. To this end he became one of the organizers of the St. Louis Exposition and for twelve years was president of the Exposition Company. He was also president at the first meeting of the Autumnal Festivities Association, introducing the Veiled Prophet’s celebration in 1891. This had become one of the most important social features of St. Louis and was the means of bringing thousands of visitors to the city every year, thus making known the city’s resources and greatly promoting its commercial activities. Mr. Kennard became the vice president of the Louisiana Purchase Exposition Company and was the first president of the Business Men’s League. He was thus most active and prominent in promoting the great projects which have had to do with the development and upbuilding of St. Louis and the effect of his labors is immeasurable. His political allegiance was given to the democratic party. 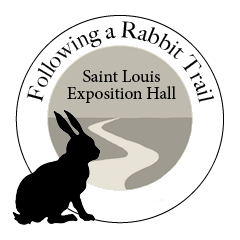 “He was a man whom the world respected and honored, while those who came within the circle of his close acquaintance greatly prized his friendship.”

He belonged to the Confederate Veterans and in 1897-8 was brigadier general of the Missouri Division. He became one of the organizers of the Mercantile Club of St. Louis and also held membership with the Commercial, St. Louis, and St. Louis Country Club. His religious faith was manifest in his membership in the Methodist Episcopal Church, South, and at his death his estate was generously shared with eight different charitable organizations and institutions, to which he made liberal bequests. Quietly and without ostentation, he was continually giving for the benefit of his fellowmen through organized benevolences or through individuals and his hand was ever reaching down to those less fortunate than himself that he might aid them to rise to a higher level. He was a man whom the world respected and honored, while those who came within the circle of his close acquaintance greatly prized his friendship. 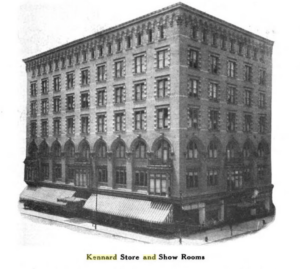 One of the most attractive places to which Saint Louis hostesses take their visitors, is the fifth floor of the J. Kennard & Sons Carpet Company, on Fourth Street, from Washington to St. Charles streets.

The famous carpet house was established in 1857 by the elder John Kennard, who came to Saint Louis from Kentucky in that year, associating with himself his sons, under the firm name of J. Kennard and Sons Carpet Company, and by which name the house has been known to the present time. It is said to be the largest carpet house in the United States, great not only by reason of volume of its business and the vast extent of the territory covered by its trade, but also in the integrity of the transactions, a commercial institution of which Saint Louis is justly proud. Mr. Samuel Kennard, as son of the founder of the company, is now president.

J. Kennard & Sons are the largest, and the only direct, importers of oriental rugs in Saint Louis. They have been selling rugs in this city since these rugs have been known in the United States, and for the past four or five years, they, seeing the great demand for them, have been sending their own buyers to Constantinople and buying direct. 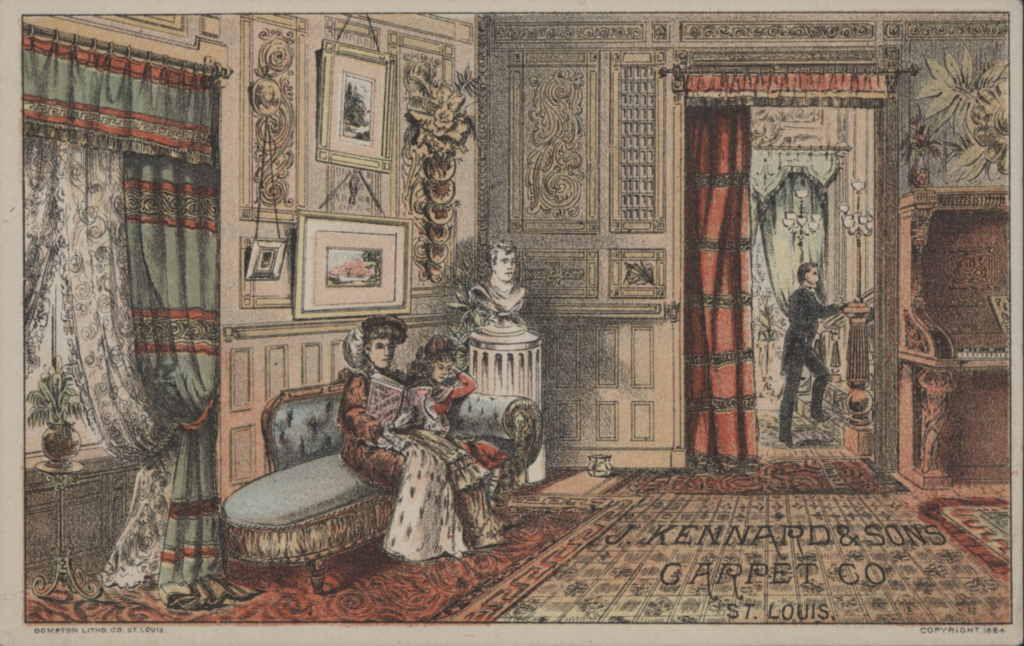 In the Sixteenth Century rug weaving came to its height, when the master pieces of Persian weaving were done as an artist paints a beautiful picture. They were not made to use on the floors, but thirty or forty years were spent on one rug, and as a work of art was treated as such, and left as a monument, just as a painting or piece of statuary.

Today these wonderful specimens of textile art are in museums, like the famous collection in the Imperial Royal Austrian Commercial Museum, the South Kensington Museum in London, and several other museums in France and Germany. These rugs being valued at from fifty to one hundred thousand dollars each. 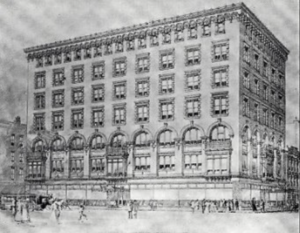 Our best homes today in the United States and the large European cities, have their floors covered with oriental rugs, their soft tones and coloring being in harmony with the present modes of decorating. The very best makes that are now coming from Persia, are the Kirmanshah, from the district of Kirmanshah, on account of its soft tones, pleasing dyes and close weave.

In the Curtain Department will be found the newest materials for draperies and wall coverings for parlors, dens, libraries, dining rooms and halls, including many choice reproductions of French and English periods. Interior decorative work of walls and ceilings in oil or distemper is also a feature of this department. On visiting the fifth floor one finds themselves in a wilderness of all that is beautiful in decorations – Tiffany leaded glass lamps, decorative and reading from $30.00 to $500.00; dining room domes from $130.00 to $400.00; a display of electric fixtures – the finest in the West, suitable for all places, the most notable of the present styles being the hammered effects in old brass, and the silver fixtures after the style of old english Sheffield plate.

On this floor is also found exquisite furniture, comprising correct copies in all periods – the most notable in dining room sets being an Elizabethan in old Flemish oak, and a Colonial and Jocobin in mahogany. English hall furniture, settees, arm and side chairs in Elizabethan, and William and Mary periods; living room and library reading and easy chairs in English morocco and tapestry of the most exclusive and unusual models; a beautiful line of artistic mirrors and wonderful collection of English prints, etchings, water colors and oil paintings; a large and varied assortment of the finest china from the best makers in the world – English, French and Russian; table glass from Baccarat of France, Count Harrach of Bohemia and Dorflinger of New York; a very exclusive line of old Dutch silver, also copies of old English silver and Sheffield plate; bronzes from the best makers in Paris, and a great many of the exclusive novelties that are seen in the shops in the Rue de la Paix and Avenue du Opera in Paris, and Picadilly and Bond Street, London, make up this wonderful and interesting collection. 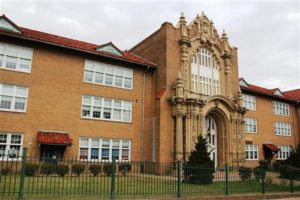 In his memory, the Samuel M. Kennard School at 5031 Potomac Street was opened in 1930. It was designed by George W. Sanger and is named for this well-known St. Louis merchant and city benefactor. Kennard Classical Junior Academy is a full-time, tuition-free Gifted and Talented Magnet School located just south of “The Hill,” a historic Italian neighborhood in St. Louis, MO. Built in 1928 and dedicated in 1930, Kennard CJA formerly served as a Junior Naval ROTC Middle School, JNROTC High School, and as a centralized pupil personnel services facility. 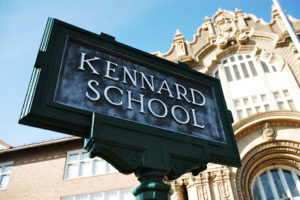 After serving thousands of students and their families for more than five decades, Kennard School closed in 1989 and reopened in 1990 as an elementary Gifted and Talented Magnet School as part of the magnet schools system tied to the city’s desegregation plan. The diverse student population consists of urban and suburban students from a wide range of cultures, ethnic backgrounds, and socio-economic groups. Student acceptance to Kennard is based on the state criteria for gifted identification, as well as Saint Louis Public Schools’ criteria for magnet school placement.

The magnet school for gifted children in south St. Louis will be known as Classical Junior Academy for the 2020-2021 school year after approval from the St. Louis Public Schools board of education.

Samuel Kennard worked as an aide to Nathan Bedford Forrest, the general who became an organizer of the Ku Klux Klan. After the Civil War, Kennard became one of St. Louis’ ruling elites who supported causes at the expense of Black and poor white people. He operated a carpet company on Washington Avenue, lived in a 25-room mansion on Portland Place and was the first president of the Veiled Prophet Association. Kennard died in 1916.

Concerned parents launched efforts to change the school’s name more than five years ago. The discussion was held in the context of a school where students are 61% white in a district that is more than 80% Black. A new group of parents is working on racial equity concerns in the district.