Father of Congregationalism in Saint Louis 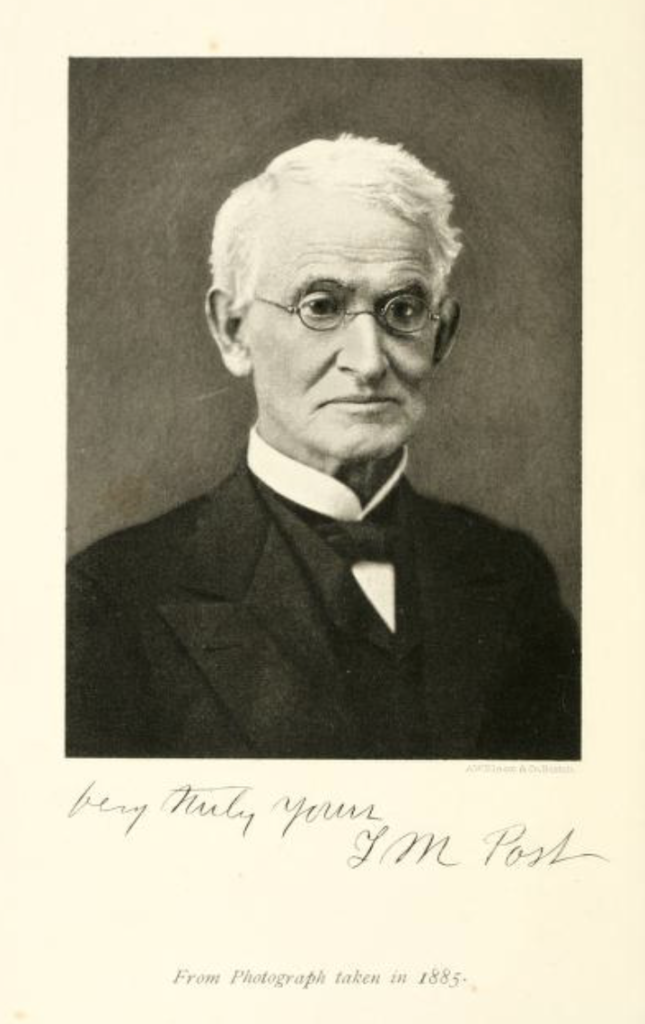 Rev. Truman M. Post was born in Middlebury, Vermont, June 3, 1810. His father, a lawyer, died before he was a year old, and his training devolved upon his mother. He attended the common schools of his native place, but studied and read independently of his teachers, his progress being so rapid that at the age of fifteen, he entered Middlebury College, a self-taught and rather precocious young man. He graduated from this institution when only nineteen years old, as valedictorian of his class. He was then engaged a year as principal of the Castleton Academy, and for two years as a tutor at Middlebury College. He then began the study of law, but he had also a decided bias for theological investigation, and in 1831, while a tutor at Middlebury, he was led to change his purpose. Accordingly, in the autumn of 1832, he went to Andover, with the view of pursuing a course of study for the Christian ministry, but when about to make profession of Christianity he found himself debarred from communions which seemed genuinely representative by creeds which required, as conditions of membership, categorical statements of belief which seemed to him speculative, and as to which he had no positive convictions. These difficulties not yielding, he turned again to law, and in the prosecution of his studies spent the winter of 1832-33 in Washington, when he was a constant attendant upon the sessions of the Supreme Court, and a deeply-interested spectator of the exciting oratorical contests between Webster, Calhoun, and other giants of the period, which marked the close of the old regime and the inauguration of a new political era. 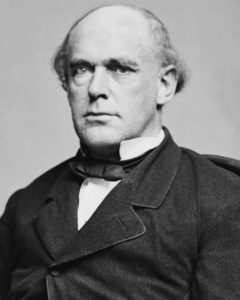 Salmon Portland Chase (January 13, 1808 – May 7, 1873) was an American politician and jurist who served as the sixth Chief Justice of the United States from 1864 to 1873. Earlier in his career, Chase was the 23rd Governor of Ohio and a U.S. Senator from Ohio prior to service under Abraham Lincoln as the 25th Secretary of the Treasury.

While yet in doubt as to his future course, Mr. Post was persuaded by General (afterwards Governor) Duncan of Illinois, to visit the West, and in the spring of 1833 started thither, passing a few days at Cincinnati, where he made the acquaintance of Salmon P. Chase, then a young lawyer, whose friendship he retained through life, and of Dr. Lyman Beecher, who advised him as to his religious difficulties. He arrived at St. Louis in May of that year, and made arrangements to enter the law-office of H. R. Gamble. Before settling down in his new career, however, he visited his friend, General Duncan, at Jacksonville, Illinois, an soon after his arrival was prevailed upon to accept a temporary engagement as assistant instructor in Illinois College, at that point. This temporary arrangement was soon made permanent, and resulted in a sty of fourteen years at Jacksonville.

In the fall of 1833 he made his first formal public profession of faith in Christianity (his religious difficulties having been partly removed), and joined a little Congregational Church then being formed. In 1835 he revisted Middlebury, his native place, and married a daughter of Honorable Daniel Henshaw, a prominent citizen of Vermont.  The union proved a singularly happy one.

In the financial revulsions of 1837-38 the funds of the college failed, and pecuniary considerations urged Mr. Post to return to the law. But while considering the problem he was besought by the church to “take license” and become its pastor. Eventually he acceded to the request, but on appearing before the association for examination he expressly repudiated the term “licensing” or “being licensed,” and the implied assumption of spiritual authority over preacher or congregation. The association was startled, but on examination of Mr. Post’s historical references it conceded his position, and granted him merely a recommendation as a preacher. For several years he combined the classical instruction of historical lectures of the classroom with the labors of the pulpit and the pastorate.

But the revenue from both sources was still insufficient to satisfy his pecuniary necessities, and a change became imperative. Meanwhile he had been repeatedly solicited fo remove to St. Louis, to assume charge of the Third Presbyterian Church, and in 1847 he received a specially urgent call. He was, however, deeply attached to the college, and was also extremely unwilling to live in a community in which slavery existed. He finally accepted the invitation on the express condition that his letter of acceptance should be read publicly, and then the question of renewing the call be submitted to the people. In this letter he stated that he regarded holding human beings as property as a violation of the first principles of the Christian religion, and that while he did not require the church to adopt his views, he thought every Christian should be alive to the question of slavery; and as for himself, he must be guaranteed perfect liberty of opinion and speech on the subject, otherwise he did not think God called him to add to the number of slaves already in Missouri. The church heard the letter and unanimously renewed the invitation, where upon Professor Post, in the fall of 1847, became the pastor of the Third Presbyterian Church of St. Louis, limiting the engagement to four years, in the hope he might be able to return to the college at the expiration of that period. 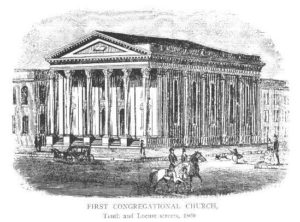 But at the close of the alloted term, the church with great unanimity voted to become a Congregational Church, and chose Rev. Mr. Post as its pastor, a position which under the circumstances he was constrained to accept, and which he held uninterruptedly until his resignation, which took effect January 1, 1882. Under his pastorate the church prospered, and became the rallying-point for opinions that later became potential in the great Civil War. During that period Mr. Post did not forbear to assert the supremacy of those principles of personal liberty and responsibility which he had brought with him from New England, but did so with so much courtesy as well as courage, the he commanded the entire respect of a congregation and community of widely differing opinions.

Outside of his duties immediately pertaining to his pastorate, he became closely identified with the development of the educational and charitable enterprises of the city, and labored with an energy and catholicity of spirit not excelled by any in his profession. The abolition of slavery removed a great barrier to the spread of Congregationalism, and the subsequent rapid planting of churches of that faith in this portion of the Mississippi Valley was greatly aided by his counsels. 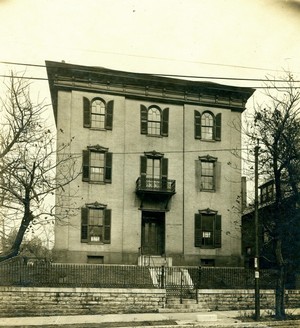 His resignation as pastor of the First Congregational Church was accepted with reluctance, and, as previously stated in recognition of his years of service, the title Pastor Emeritus was conferred upon him. Many years ago his Alma Mater, Middlebury College, bestowed upon him the degree of Doctor of Divinity.

Force and effectiveness are the characteristics of Dr. Post as a preacher. He possesses a brilliant and poetic fancy, and his historical studies enable him to analyze events with a philosophic eye. This perhaps was the secret of his power and influence in the agitation preceding and attending the civil war. Many of his discourses and addresses were widely circulated, and contributed greatly to strengthening the hands of the Unionists. He also aided the cause by frequent contributions to the press.

Although a prominent actor in the local agitation of the period, Dr. Post was never lacking in the performance of any of the usual duties of a pastor, and his nearly thirty-fivi years in ministry in St. Louis were singularly faithful and useful ones.

In 1873, while in Europe, he was summoned home by the death of his estimable wife. Their union hd resulted in three sons and three daughters, all living; two of the sons are lawyers and one is a physician, all of them occupying a creditable position in their several callings. 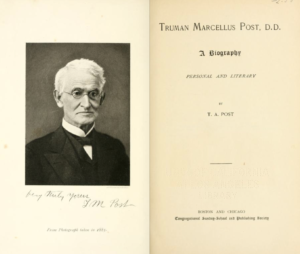 Truman Marcellus Post,D.D., a biography, personal and literary by Truman A. Post 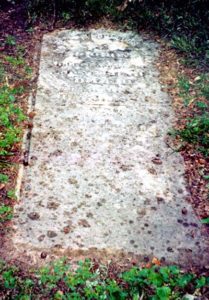 Post was a religious leader in St. Louis. While studying law, he spent five months attending Andover Theological Seminary. After moving to Jacksonville, Illinois, Post was appointed professor of ancient languages and ancient history at Illinois College. He was admitted to the Illinois bar in 1833 and was ordained a minister in 1840. After the Lovejoy riot in Alton in 1837, Post became more vocal in his antislavery sentiments. He held public debates and wrote letters demanding justice. In 1847, he became pastor of the Third Presbyterian Church in St. Louis, which later became the First Trinitarian Congregational Church. Post became the pastor of a sister congregation called the Pilgrim Church when the church reorganized again, and was known as the “father” of Congregationalism in St. Louis. A vice president of the Congregational Union, Post continued to lecture on literary and historical topics. He wrote hundreds of book reviews for various publications and was awarded the degree of doctor of divinity by Middlebury College in 1855. He spoke at the dedication ceremony at Bellefontaine Cemetery in 1850 (below is the excerpt from his speech which is inscribed on his tombstone.)

“Soon the mourner shall follow the mourned, till we, and all hears that beat for us beneath these heavens, shall at last keep the long and silent rendezvous of the grave. Yea, I see the endless succession of the future hastening on, as the many waters of yonder mighty river, till the seasons weary in their round, and the sun grows weary in the sky, and time itself is sere and deathlike old. I see the world of Life itself passing, and Death’s shadow falls over all. But Death himself shall perish in that hour. The great Victor of Death shall summon the pale prisoners of the grave, and they shall come forth; and then, though voice of earth’s memory may have perished for ages, though the rock-hewn monument may have crumbled long cycles ago, still a record, written on no earthly marble, waits us in the great doom, and our mortal works follow us there.”