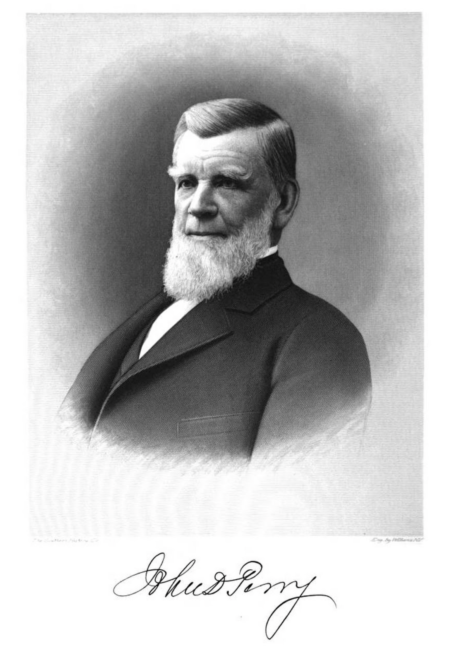 John D. Perry was born on the south branch of the Potomac River, in Hampshire County, Virginia, on the 15th of May, 1815. His father, Michael Perry, was a native of Pennsylvania, but removed to Virginia about the year 18o5, and owned and operated a flour mill on the Potomac River. The Perrys were of good Scotch-Irish stock, and the subject of this sketch exhibited in his business career, his difficult enterprises, and his social relations, the qualities of that vigorous, sturdy strain.

His mother was Rachael Bartholow, a daugh­ter of Thomas and Ann (Nelson) Bartholow, a good Virginia family, whose founder emi­grated from Alsace-Lorraine to the American colonies about the year 1700. His mother died when he was eighteen months old, and his father having no relatives near him, the child and his brother, Thomas W., were en­tnisted to their maternal grandmother, whose sterling virtues and Christian character fitted her for the task. Two years after the death of his mother his grandfather Bartholow re­moved to the western part of Virginia, at that time a sparsely settled region, and shortly afterward their father, Michael Perry, died. They received such instructions as the winter schools of the country afforded, and from their grandmother the discipline and training that constituted the chief part of their education.

At the age of fifteen John D. Perry began clerking in a small country store in the neigh­borhood. and two years later he secured em­ployment in the large store of Jonathan Haymond, who also conducted a flouring mill and other manufacturing establishments, and here he remained imtil his ambition outgrew the limited opportunities of a small, quiet district, in which there was little prospect of advance­ment. In 1840 he removed to Missouri and located at Fayette, the county seat of Howard County, at that time a thriving and enterpris­ing town, and the center of a rich tobacco and hemp-raising region. At first he engaged in general merchandising, but shortly afterward added the manufacture of hemp bagging and rope, which turned out fortunately, and the young merchant and manufacturer came to be looked up to because of the correctness of his opinions, the soundness of his judgment, and the probity of his character in business mat­ters.

But Fayette was twelve miles from the Missouri River, which was becoming every year more and more a great central channel of trade for the State, and, for the facilitation of his growing business, Mr. Perry found it advis­able to remove to Glasgow, a thriving town on the river in the same county. Here he continued to prosper, until he was recognized as one of the leading business men of Central Missouri. When the enterprise of construct­ing a plank road from Glasgow to Huntsville, the first of the kind in Missouri, was discussed and decided upon, Mr. Perry was chosen to raise the money for the work and lead the en­terprise, and was made president of the com­pany that executed it, and he had the satisfac­tion of seeing it become of great advantage to both places.

In the spring of 1854 he decided to seek a still wider field of effort, and. having disposed of his interests in Glasgow, removed to St. Louis and engaged in the manufactur­ing business with his brother-in-law, W. J. Lewis. He remained a citizen of St. Louis until the end of his life, taking an active and lead­ing part in many enterprises. for his judgment was so wise, and his foresight so clear, that, al­most invariably. those who chanced to be his associates in any enterprise which he ap­proved, and in which he jnvested his means, placed him at the head of it-and so it fell to him to carry through a number of undertak­ings. When, several years before the Civil War, the State Legislature authorized a sys­tem of banks, Mr. Perry organized the Exchange Bank, and at a later day he assisted in founding the Laclede Bank; and later still he took a leading part in the construction of the Merchants’ Bridge and the terminal system connected with it, and assisted also in estab­lishing the Standard Stamping Company, an important industrial enterprise.

But the great work of Mr. Perry’s life was the construction of the Kansas Pacific Railroad-an enterprise to which he devoted the best energies and the highest capacities of his nature. There were several other leading citizens of St. Louis as­sociated with- him in this undertaking, the most prominent among them being Carlos S. Greeley and Adolphus Meier, but from the time when Mr. Perry invested his private for­tune in it, they made him president and com­mitted it to his hands, approving all he did and supporting him in every measure that he pro­posed for the prosecution of the work. The charter of the road provided for three branches. and that the one first reaching the one hun­dredth meridian should be the main line. It was Mr. Perry’s settled purpose from the be­ginning to reach the meridian with the Kansas Pacific, and thus make St. Louis the chief gate­way through which the great traffic across the continent between the two oceans should pass -and it was not his fault that this object was not accomplished. It was defeated through a suit brought against the company, which im­peded its progress and harassed its manage­ment, and thus permitted the Omaha branch to secure the prize.

Nevertheless, Mr. Perry built his road to Denver, from which point a connecting road was built to the Union Pa­cific. The Kansas Pacific has been of great benefit to St. Louis, being one of the main arms in that admirable system of railways that surround it-and it has been of immense bene­fit also to the State of Kansas, through which it runs. and so long as the history of its con­stmction shall be remembered it will remain a monument to the energy, sagacity and ster­ling uprightness of John D. Perry. The ex­acting labors and wearing anxieties of this work caused Mr. Perry’s health to break down, and he found it necessary to seek relief in a four-years’ tour in the Old World, taking his family with him, and visiting Europe, Egypt, and the historic places of Westem Asia. 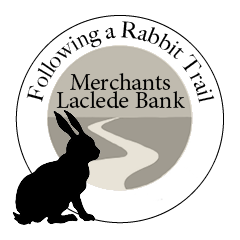 On his return, with health re-estab­lished and his spirits revived. he again em­barked in business, and took part in the several enterprises which closed his active busines career, the organization of the Laclede Bank, the building of the Merchants’ Bridge, with its important terminal arrangements, and the founding of the Standard Stamping Company. After these were successfully estab­lished he partially withdrew from active oper­ations, and spent his declining years in the bosom of the quiet and happy family which, from first to last, had been the center of his joys. He died on the 24th or August, 1895, eighty years of age.

Mr. Perry was a man of simple, temperate habits, and unostentatious and affable manners, exhibiting in his inter­course with friends and strangers the spirit and breeding of the old-school Virginian. He was a stranger to tricks and pretenses, always open, frank and sincere, and in his whole busi­ness career he resolutely held himself above seeking his own advantage in ways that even bore the appearance of being unfair or dishon­orable. He was accustomed to say that it was easy enough, with forethought, prudence, and the aid of trained habits, to achieve success in business without deviating in the slightest de­gree from the line of rectitude and honor-and that a success secured in any other way was not worth having. This was the high and noble character which his business associates recognized in him in all the many enterprises with which he had to do; and it was counted a great advantage in a new undertaking if it had the approval of his judgment, and could, in addition, claim the public confidence by having his name at the head of it. In all con­ditions and relations consideration for others was paramount with him; it was the keynote of his character, and it made him a re?liable counselor and a gentle and desirable compan­ion.

To trust to his honor was to appeal to the highest and most active principles of his nature, for his morality was deeper than conventionalisms, or the forms and customs of business; it was a prompt and quick sense of right, and it never permitted an interest en­trusted to him by individuals or corporations to suffer or sacrifice if he had the power to protect it. Mr. Perry possessed a distinct and impressive personality that was all his own, and his affable manners, constant thought for others, gentle and modest demeanor. and grave and dignified bearing gave a charm to his presence in whatever circle he might be found, whether a board of directors. a chance meeting or friends in travel, or the sacred com­pany of his own household.

Mr. Perry was twice married. His first wife was a daughter of John Broaddus, of Howard Couny by whom he had two children. only one of whom. Miss Mary E. Perry, is living. His second wife was a daughter of Talton Turner, also of Howard County, by whom he had four chil­dren-Mrs. Francis, wife of Honorable David R. Francis; Lewis Perry, Richard Earickson Perry and Laura Perry-all of whom survive him.

Encyclopedia of the History of St. Louis: A Compendium of History and Biography for REady Reference, Volume 3, Part 2, 1899